Our new interactive portal incorporating suburb-based information and data for suburbs within the greater Sydney basin is now live: Aircraft in Your Neighbourhood.

This portal replaces previous reporting on aircraft operations and complaints in this region. The portal will be progressively expanded to cover other metropolitan areas over the coming years.

Information about operations, including flight paths, movements, runways, noise monitoring, investigations and complaints is now available through our reporting links.

Access our new interactive portal incorporating suburb-based information and data for suburbs within the greater Sydney basin: Aircraft in Your Neighbourhood.

Flight paths are not precise, defined paths like runways, but more like corridors that are often several kilometres wide.

A series of flight path changes came into effect at the Gold Coast Airport in August 2016. These changes are part of a nationwide Navigation Modernisation Program.

The changes are in response to the Civil Aviation Safety Authority (CASA) and International Civil Aviation Organisation (ICAO) requirements for increased runway alignment and for all aircraft operating under Instrument Flight Rules to be able to navigate using satellite-assisted means when flying in Australian airspace.

CASA and ICAO require Airservices to introduce these changes to ensure the highest levels of safety assurance is achieved in accordance with international practices and requirements.

What are the changes?

South of the Airport

Change to the VHF Omni-Directional Range (VOR) and Non-Directional Beacon (NDB) procedures
This flight path was previously offset from runway alignment by 9 degrees. The change reduces this offset to 5 degrees and moves the flight path slightly to the west. Aircraft noise is expected to fall within the existing corridor. The VOR and NDB approach procedure is used infrequently as it does not employ the most current technology and is retained as a contingency approach.

North of the Airport

Change to the VHF Omni-Directional Range (VOR) and Non-Directional Beacon (NDB) procedures
This flight path was previously offset from runway alignment by 11 degrees. The change reduces this offset to 5 degrees. Aircraft will now cross the coast to fly over land between Surfers Paradise and Broadbeach, then continue south over Mermaid Beach before crossing the coast again and proceeding towards the airport over water. While tracking down the coast over water towards the airport, aircraft will now fly closer to land than previously. The VOR approach procedure is used infrequently as it does not employ the most current technology and is retained as a contingency approach.

Change to the area navigation RNAV approach
This flight path was previously offset from the runway by 12 degrees, producing a spread of aircraft traffic approaching the coast between Burleigh Heads and Currumbin to align with the runway. The new flight path will be runway aligned. Aircraft will now approach the coast at a more precise point at Palm Beach and fly closer to land than previously to align with the runway. Aircraft will remain over water until crossing the coast around Currumbin before landing.

Darwin International Airport is located within the city of Darwin, in the Northern Territory, and is a joint civil-military aerodrome.

Darwin arrivals and departures
Airservices and Defence recently performed a regular review of the changes that were made in 2015 and identified some minor adjustments that are required to ensure the highest level of safety assurance is achieved and that aircraft are managed as efficiently as possible. These changes will come into effect on 26 May 2016.

The Community Aviation Consultation Group (CACG) is the primary forum for community engagement with airport management and other industry stakeholders.  It is independently-chaired and meets three times per year.  The purpose of the CACG is to ensure community views are heard by the airport and to provide members of the community with an opportunity to obtain information about airport operations.

Airservices attends and actively engages in the Darwin CACG regarding changes to procedures or operations and to assist in discussions. Airservices is committed to identifying potential noise improvement opportunities at all airports around Australia.

Noise management is controlled by aircraft noise abatement procedures and routine aircraft noise monitoring undertaken by Darwin International Airport and the Department of Defence. Royal Australian Air Force (RAAF) Base Darwin manages a toll-free noise enquiry hotline for any community complaints regarding military aircraft. Darwin International Airport and RAAF Base Darwin work in partnership to respond to any public concerns.

The airport opened on 10 November 2014 with the first scheduled passenger flights on 17 November 2014. A mix of jet and propeller aircraft and helicopters are expected.

The information provided below is to assist the community with information on how the airport and airspace will operate and where aircraft might fly.

Airservices has published flight procedures for Brisbane West Wellcamp Airport, these procedures were not designed by Airservices.

The airport will operate in uncontrolled airspace.

What is uncontrolled airspace?

Where will aircraft fly and will I notice any noise?

Brisbane West Wellcamp Airport has one runway which is oriented northwest to southeast as shown in the picture below.

Take off and landing is generally when aircraft have the greatest noise impact. Aircraft take off and land into the wind, or with minimal tail wind. As a result, the wind dictates runway selection which in turn determines the flight paths used.

In good weather with high visibility, aircraft are expected to:

In bad weather when there is low visibility, scheduled passenger aircraft are expected to depart and arrive using the flight path corridors pictured below.

Smaller aircraft will not necessarily fly within these flight path corridors, but are required to be a minimum of 300 metres above any city, town or populated area and 150 metres over other areas as outlined in the Civil Aviation Regulations – REG 157. 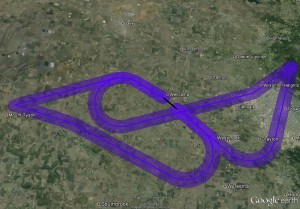 Purple area shows the flight path corridors where scheduled passenger aircraft are expected to fly when departing from the airport in bad weather, when there is low visibility. Black line shows the runway. Runway numbers are indicated in white. 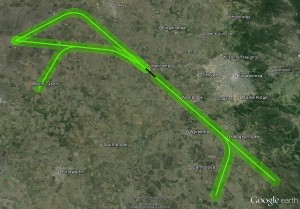 Green lines show flight path corridors where scheduled passenger aircraft are expected to fly when arriving at the airport in bad weather, where there is low visibility.  Black line shows the runway. Runway numbers are indicated in white.

Brisbane West Wellcamp Airport has developed noise abatement procedures to minimise the impacts of aircraft noise. These include:

Cathay Pacific Airways Boeing 747-8F aircraft will land at Brisbane West Wellcamp Airport from Sydney and depart for Hong Kong on 23 November 2015. It will be the first time an international flight has departed from Australia’s newest airport and the first time Cathay Pacific Airways has operated a cargo service into an Australian regional centre.

It is the intention that regular scheduled freight services will commence at Brisbane West Wellcamp Airport in the first half of 2016.  Further details of flight schedules will be made available closer to the date.

May 2017
Airservices and RAAF Townsville are realigning the satellite based navigation approach to Runway 19 to improve safety and improve the landing capability of aircraft. The new flight path will move approximately 2km west of Horseshoe Bay residential area and reduce overall noise impacts relative to the existing flight path.

There are a small number of residents located to the west of Horseshoe Bay who may notice an increase in noise levels and a change in aircraft tracking.